Changes to the Cloud ForNAV layout and custom layout format

In Microsoft Dynamics 365 Business Central 20 (2022 release wave 1), Microsoft is starting to move the Word rendering subsystem from being open for modification to a proprietary and closed system. As a replacement, Microsoft is introducing a new layout type that does not piggy back on the Word format.

From the beginning, ForNAV cloud reporting has piggy backed on the Word layout subsystem and these changes mean that we will move to a new text-based xml format. This format also has the benefit of being human-readable, which means that it is easy to track changes in a source control system.

The timeline for this change will be as follows:

To use the current ForNAV Report Pack, you must change the new platform Word rendering feature on the Feature Management page from All Users to None to turn it off. Otherwise, all ForNAV reports will return empty output. 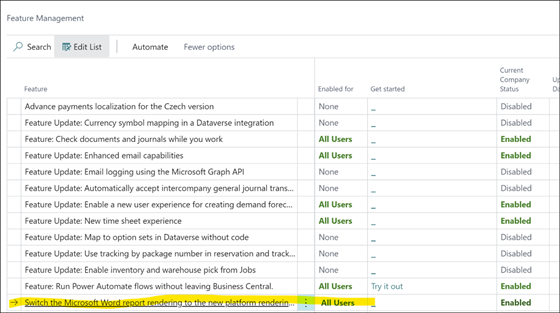